The 2013 summer meeting of the Guild of Medical Ringers was held in North Somerset over the weekend of the 17th -19th May. Our thanks go to Teresa Humphrey for organising the venue. The special methods for the weekend were Wrington Bob Caters, Bristol Major and Wells Minor.

On Friday morning a quarter peal of 1260 Plain Bob Minor was rung at Ss Quiricus and Julietta, Tickenham, in memory of Dr Jean Weddell, a Past President of the Guild. Two dozen ringers then gathered for lunch at the pub in Clapton – in – Gordano. The church here is in the care of the Churches Conservation Trust and the six bells were the first ring of the afternoon. Next stop was the 8 of Wraxall, All Saints. The bells are a heavy 8, the oldest bell being cast in 1705. Our last main tower was the 6 of St Mary, Portbury, a landmark close to the M5 motorway. This ring with its 21 cwt tenor was recently refurbished along with the belfry, although it is fair to say that it was felt that they were not known for their musicality. For those really keen there was then by special request the 2 of St Mary, Christon. These required a little oiling to get them going.
Most of the band stayed at the Webbington Hotel and Spa at Loxton. After dinner there was then the opportunity to ring at St Andrew, Compton Bishop.
Saturday dawned as a beautifully sunny day. Our first tower was the 10 of St Andrew Banwell. This is a magnificent, mainly15th Century church. Thirty six of us gathered for the day and it was great to have a tower big enough to accommodate us. Next stop was the 8 at St Andrew, Congresbury. We arrived here just in time for the coffee morning and plant stall. A few plants were sneaked back to cars by some members and others had a caffeine fix whilst some ascended the tower. The last tower of the morning was the 8 of Blessed Virgin Mary, Yatton. This is a very palatial church with an unusual truncated tower.
Lunch was at the Plough Inn at Wrington. Despite initial concerns about the pre-booking, we had speedy efficient service with very good and substantial food. Rejuvenated and on time were then ready for the 10 of All Saints, Wrington. This is a grade 1 listed building and the bells were rehung during 2010. At the end of ringing we gathered in the churchyard for a guild photograph, all respectfully gathered around the memorial there. The parish church of St Michael and All Angels, Rowberrow was our next stop. This ground floor 6 is one of the lighter rings in this part of Somerset and the size of the band meant we had time to gather, chat and catch up on news. Rowberrow was at one time the home of the author Terry Pratchett. Last stop was the 6 of St John the Baptist, Axbridge with its fine medieval square and church with its stunning ceiling. There had just been a ‘Messy Saturday’ there and clearing up was underway in the church. We successfully rang Wells here.
We had been extremely lucky that the rain originally forecast did not materialise and we made it through the day in glorious sunshine. It was a relaxed enjoyable day with arrangements going like clockwork. Dinner was held at the Webbington Hotel along with a wedding reception but we were well looked after.

Sunday was another beautifully sunny day and we had a choice of a number of towers to visit for Sunday Service ringing before retracing or route home. 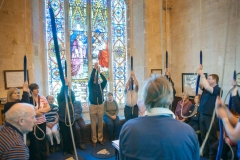 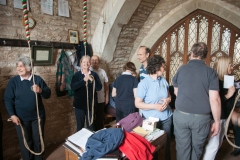 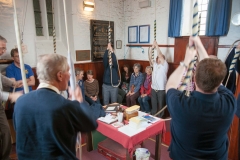 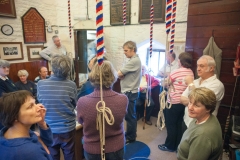 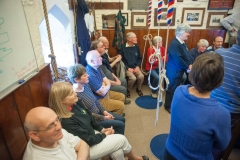 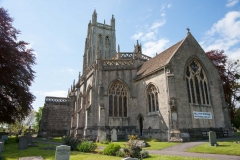 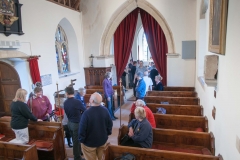 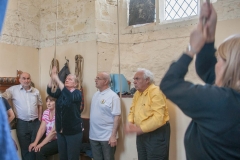 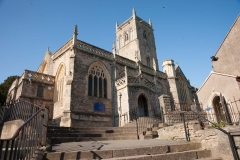