On Sunday 5th July 2020, the 72nd Anniversary of the National Health Service, Fiona and Martin Clode rang a handbell Peal of 5072 changes in eleven methods for the Guild. it took them One hour and 45 minutes and was rung at their home in Hendon, North London. Not only was this rung during the COVID 19 Pandemic, but it is also the first handbell peal and the first peal of minimus for the Guild. Full details of the peal are in the Peals and Quarter Peals section. 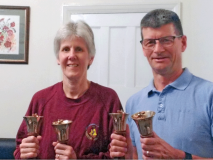 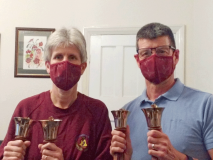 The 2019 Annual General Meeting of the Guild took place in London on Saturday 30th November. Full details can be found in the Meetings pages…

The London Teaching Hospitals are well known institutions to many around the country who may have been students, staff, patients or visitors in them at one time or another. The two oldest, St Bartholomew’s and St Thomas’, were both founded in the 12th century as offshoots of Augustinian Priories. Little changed until well after the Reformation.
By 1700 Westminster had grown as a city alongside the Thames around Parliament, the Royal Court and the Abbey and was separate from the City of London. It contained the extremes of wealth and poverty as the gentry and aristocracy attached to parliament and the court lived alongside the servants, craftsmen and tradesmen who catered for their needs. Much of modern Pimlico was still fields and marshland with no roads or sanitation.
In 1716 four gentlemen (a banker, a writer, a vintner and a clergyman) met at a coffee house in Fleet Street to discuss their concern for the needs of the sick poor of Westminster. They raised £10 which they used to buy food for sick prisoners in the local jail. In 1719 the four met again in the same coffee house along with eight others. This time they set up a charitable society which began renting a small house in Westminster for £22 per year in which they opened an infirmary with 10 beds – the third London hospital and the first of the new voluntary hospitals funded by public subscription.
The Westminster Hospital has undergone many expansions, additions and moves since 1719, even occupying a site opposite the West doors of Westminster Abbey from 1831 to 1939 – the site now occupied by the Queen Elizabeth II Conference Centre. From there it moved to Horseferry Road on the west side of Lambeth Bridge, and in 1993 it moved again to become the new Chelsea and Westminster Hospital in Fulham Road. 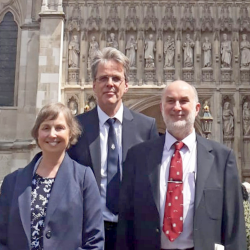 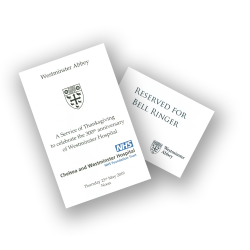 The hospital’s own charity, CW+, organised a special service to celebrate the hospital’s 300th anniversary at Westminster Abbey on 23rd May 2019. As President of the Medical Guild and a former employee of the hospital I enquired if it would be possible for the Guild to be represented in the ringing after the service. I am grateful to the Abbey Company for inviting three Guild members to ring with them – two who worked in the Westminster Hospital group in the past together with the current Guild Master. I am also grateful to CW+ for arranging for the three of us to attend the service.
Later that day members of the Guild rang a quarter peal in Pimlico to mark the anniversary, and reminisced in the pub afterwards about their experiences of training and working in several of the London hospitals. Full details of the quarter peal are in the Peals and Quarter Peals section. My thanks to Richard Morgan and Geraldine Forster for their help in arranging an excellent and very enjoyable day.
For those interested in London medical history – the next in line is Guy’s Hospital, my own alma mater, which will be celebrating its 300th anniversary in 2021.

The 2019 Summer Meeting of the Guild took place in and around Chester over the weekend of 17th –  19th May. Full details can be found in the Meetings pages…

The 2018 Annual General Meeting of the Guild took place in London on Saturday 24th November. Full details can be found in the Meetings pages…

The first quarter peal of Maximus for the Guild was rung on Wednesday 12th November at Liverpool Cathedral. The occasion was the 33rd Annual Cheshire and Merseyside NHS Carol Concert. The Guild has rung quarter peals for this event since 2013 and this year’s band included two nurses, two paramedics, two general practitioners, a paediatrician, an oncologist, a dentist, an anaesthetist, a surgeon, a pathologist and a patient.  The method was Plain Bob Maximus and the quarter peal took one hour and twelve minutes to ring. Full details of the quarter peal are in the Peals and Quarter Peals section. 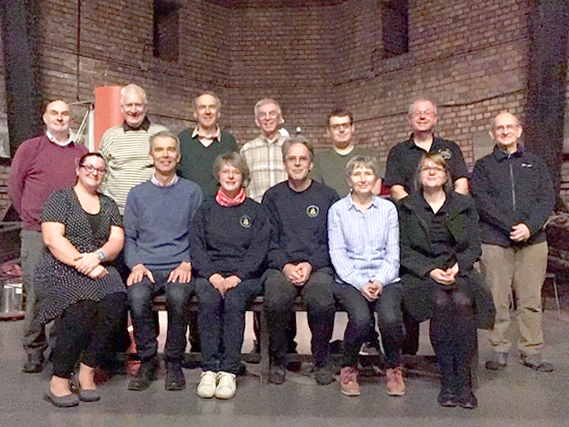 70th Anniversary of the NHS

Eight quarter peals were rung for the Guild to commemorate the 70th Anniversary of the founding of the NHS. Four were rung on Thursday 5th July 2018, the actual anniversary, another two were rung the next day and two more rung at the beginning of August.

On 5 July 1948, the NHS was launched by the then Health Secretary, Aneurin Bevan, at Park Hospital in Manchester (known today as Trafford General Hospital). For the first time, hospitals, doctors, nurses, pharmacists, opticians and dentists were brought together under one umbrella to provide services for free at the point of delivery. The Guild is not quite seventy years old, but the first all Doctors peal, of 5040 Plain bob minor, was rung on the 9th July 1947 almost exactly one year before the start of the NHS.

The quarter peals this year were rung in Somerset, Merseyside and Leicester, and involved twenty four members of the Guild. Details can be found in the Peals and Quarter Peals section of the website.