The 2019 summer meeting of the Guild of Medical Ringers was held in and around Chester on the weekend of 17-19th May 2019. Our thanks go to Peter Robson, our Ringing Master for organising all the towers and to Ken and Wendy Lee for sourcing our venue. 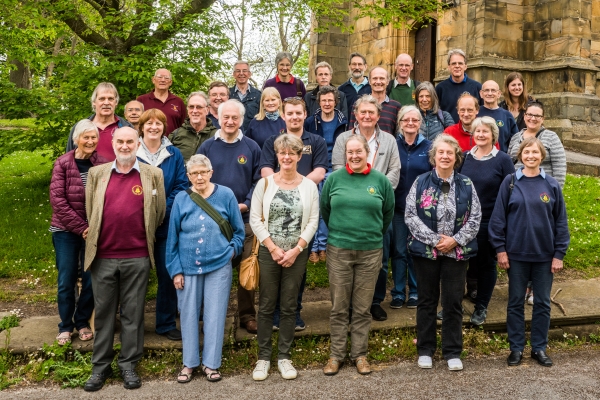 Members gathered from all over the country. Some arrived on Thursday and a quarter peal of Grandsire Triples was rung at St Michael and All Angels, Middlewich, Cheshire to start off the long weekend.  The Mercure Chester North, Ellesmere Port served as our base for the weekend.

More members then joined the group on a sunny afternoon.  The special methods for the weekend were Chester Surprise Minor and Ellesmere Little Bob Major and these were successfully rung at a number of the towers and less successfully at some others!

The first tower of the afternoon was the eight of Christ Church, Port Sunlight. This is a model village built by Lever Brothers to accommodate workers from its soap factory and contains 900 Grade II listed buildings, so definitely somewhere to return to. Next was the ten of St Saviour, Oxton Birkenhead, the two trebles here having been added in 1976. The final afternoon tower was the red sandstone church of St Bartholomew, Thurstaston, a ring of six where a Jubilee bell was added in 2002 to complete the ring. Thurstaston was the home of Thomas Ismay, Founder of White Star Line and owner of the fateful Titanic and now the home of our own Guild Ringing Master.

We found our own dinners, mainly at various country pubs, and were then fortunate to be welcomed to join the practice nights at the six of St Michael, Shotwick and the eight of St Mary and Helen, Neston.

Saturday dawned with another gloriously sunny day. As numbers swelled we had to be well organised at the towers with bands very efficiently arranged by our ringing master, Peter Robson.   This did have the advantage that it left time for chats and the occasional refreshments.  In the morning we rang at the eight of St James Christleton, the church having been rebuilt in 1877 but keeping its 15C tower; the bells were rehung and recast by Taylors in 1928. Our next tower was All Saints, Gresford which has understandably been described as one of the finest parish churches in Wales. This church hosts two rings of bells – an eight and a lighter ring augmented to six by Taylors in 2013.

The afternoon saw us ringing at three towers. First was the height of St Mary Mold, the bells here having been rehung and augmented by Eayre and Smith in 2005. This was followed by the six of St Deiniol, Harwarden. Harwarden Castle was the residence of Prime Minister Gladstone. Our final tower was the wonderful eight of St Mary the Virgin, Ecclestone and the church here was built for the 1st Duke of Westminster.

Some members left us here but 37 of us sat to a very good evening meal. This was followed by a very brief business meeting and as we had two sets of hand bells, we had two bands of hand bell ringing.

A number of towers had been proposed for Sunday service ringing at various times during the morning but as it was the Chester half marathon through Chester City, with a number of road closures, this made access challenging, particularly for the Cathedral, where we were made very welcome. People made their own choice of towers to visit before heading home. This therefore ended another very popular, successful and enjoyable summer outing.