The 2019 Annual General Meeting of the Guild was held on Saturday 30th November in the City of London. As in recent years it was arranged so most towers were within walking distance and we are very grateful to Geraldine Forster for organising this. The weather was cold and wintery but dry which was a bonus.
There was a surplus of people wishing to ring a quarter peal in the morning so we had two successful quarter peals involving 20 members of the Guild: 1260 of Grandsire Triples at St. Mary Bow and 1320 0f Plain Bob Cinques at St. Leonard, Shoreditch.
We started the afternoon ringing at the 8 of Christchurch, Spitalfields. There was a very pleasant café in the crypt, where we were able to refresh ourselves before the ascent to the tower. This church which is built between 1742 and 1724 and is one of the first Commissioners Churches has had a recent restoration and is indeed very fine inside. Almost forty members joined us at various stages of the afternoon and we were entertained by our newest potential recruit, Laila Winter aged 5 months, who was impeccably behaved throughout all the day. 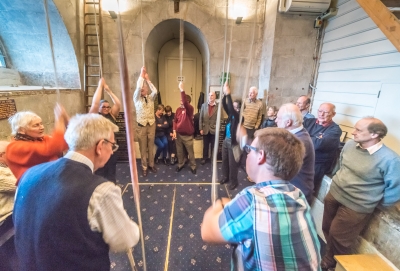 Our second tower of the day, after a twenty five minute walk, was the 6 of St. Vedast Foster Lane. As we passed the cordoned areas we thought of all caught up in the terrorist atrocity the day before. However, some members took a different path as Ken Lee had also managed to organise a ring at the three of Bethnal Green where he had wanted to ring for the last thirty years, leaving few towers in London at which he has not rung.
As darkness descended our final tower was the 8 of St. Botolph, Aldgate. The eight bells from 1744 and 1746 were rehung after a fire in 1965 but it is fair to say did present us with quite a challenge.
Some people had to leave us at that stage to get trains back to various parts of the country. There was then a walk or tube journey to the Olde Watling, in Watling Street, where 37 of us sat down for a meal. We had a short business meeting lasting until 6.45 and we were then served with a filling and enjoyable meal. The day closed in the customary manner with hand bell ringing.