The 2018 summer meeting of the Guild of Medical Ringers was held in and around Exeter on the weekend of 18-20th May 2018. Our thanks go to Richard Morgan and Wendy and Ian Campbell for all of the organisation. 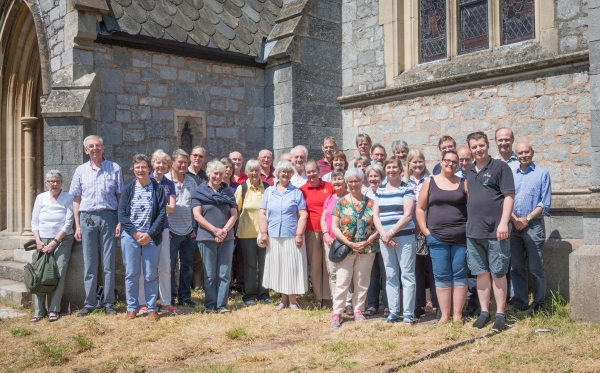 Members gathered from all over the country. Some arrived on Thursday and a quarter peal of Yorkshire Surprise Major was achieved at St John the Baptist, Wellington. The Gypsy Hill Hotel, Exeter served as our base for the weekend. Its elevated position allowed the original owner views of incoming ships and in the war it was utilized as barracks. It was however the weekend of the Devon County Show which was nearby, so the traffic was at times challenging.
On Friday morning a quarter peal of Grandsire Triples was rung at St Mary, Silverton and a quarter peal of Plain Bob Caters was rung at St Thomas of Canterbury, Thorverton. The latter had a craft fair so coffee and cakes were enjoyed by many.  More members then joined the group on a gloriously sunny afternoon.  As numbers swelled we had to be well organised at the towers with bands very efficiently arranged by our ringing master, Peter Robson.   This did have the advantage that it left time for chats and refreshments.
The special method for the weekend was Julie McDonnell New Bob Triples and Caters and this was successfully rung at a number of the towers. Our first tower of the afternoon was the eight of St John the Baptist, Broadclyst. The church here is noted for its 16 century tower and its wonderful collection of memorials and the ring of Taylor bells dates from 1937. Next was the 8 of St Michael and All Angels, Clyst Honiton followed  by the 6 of St Margaret, Topsham with bells dating from the 17th and 18th century.
We had hoped to ring at St John the Evangelist, Withycombe Raleigh but preparation for a concert meant that this was not possible. However instead we rang on the Withycombe Raleigh Myzantha Ring which were a real challenge and we were advised ‘not to frighten them ‘. This was followed by dinner and evening ringing at Exmouth Littleham.
Saturday dawned with another gloriously sunny day. We began at the 8 of St Michael and All Angels, Pinhoe with its attractive thatched lych-gate. From there we travelled to the medieval church of St Michael and All Angels, Heavitree with its 8 bells. Here we stopped for a group photograph before spreading out for a leisurely lunch.
The afternoon was largely spent in Exeter, first at the 10 of St Mark, Exeter, which were cast as a ring of eight by Taylors in 1951 and two new trebles were added in 2005. This was followed by St Petrock where the six are the lightest in Devon and are the site of the training centre. Nearby in the Exeter Cathedral School is the set of ten Saxiby DenMisch Simulators, donated by Mischa Thompson in memory of her husband Denis. Each weighs 50 kilograms and forms the basis of a very useful teaching aid, with the school having an after school club. This added extra variety to the weekend.
At this point the band divided, some going to the 8 of St Michael and All Angels, Sowton a ring of 8 Mears bells dating from 1845. Others joined the monthly open practice at the Cathedral Church of St Peter, which contains the second heaviest peal of 12 bells hung for change ringing in the world. We were very grateful for the hospitality.
Some members departed at this point but 46 of us returned to the Gypsy Hill Hotel and we were served with a very enjoyable meal. We than had a very brief business meeting, including discussions about processes in preparation for the  General Data Protection Regulations which were very soon to be imposed and this was followed by the customary hand bell ringing.
A number of towers had been proposed for Sunday service ringing but we discovered at very late notice that the Exeter marathon was to run through the city with a number of roads closed. There was therefore a modification of timetables with people making their own choice of towers to visit before heading home. This therefore ended another very popular, successful and enjoyable summer outing.
Frances Cranfield (Secretary) 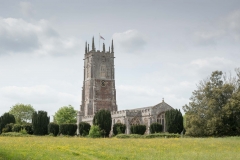 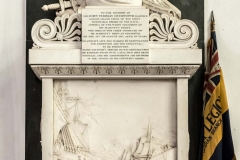 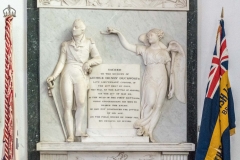 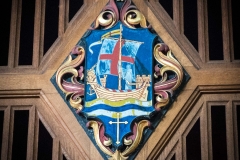 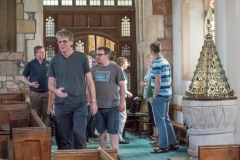 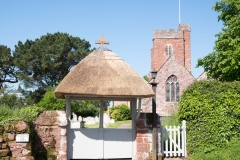 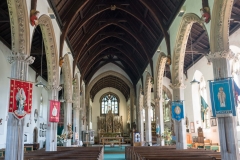 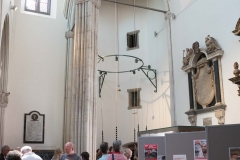 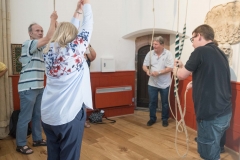 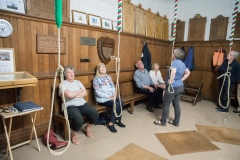 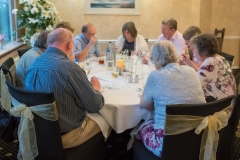 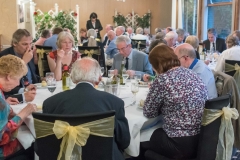