The 2003 Annual General Meeting was held on Saturday 15th November in the Islington area of London with towers kindly organised by Sebastian Lucas. The venue provided at least two new towers for most people and certainly attracted more members to London than we have seen in recent years.
The day began at St. Mary Magdelene, Holloway Road, with a quarter peal attempt of Erin Triples But the morning ended with a successful quarter peal of Grandsire Triples. However, in other respects this morning was not a success except for thieves, as whilst ringing was in progress, Tony Freemont’s car was broken into, Ken Lee’s brief case containing Guild materials was stolen and Sebastian Lucas’s bicycle seat were all stolen never to be seen again. Thus the afternoon began for some organising window repairs and new seats.
The first tower of the afternoon was St.James, Clerkenwell. These are arguably the finest sounding 8 in London but are a bit tricky to ring with a heavy go. For more than a decade they have been unavailable to visitors and rung only for weddings and once a month after the Sunday Service so we were very lucky to gain access. The ringing chamber was rather grubby and had no working light so we were lucky that it was the first tower before the natural light faded. Many members had travelled up by train so lifts were organised at this point.

The next tower was St James the Apostle, Islington. This is a new light set of bells installed by Whitechapel Bellfoundry. They were accessed by a steep wooden stair flight through a trap door entrance into a small chamber so queuing was essential. However there was plenty to amuse those of us in the queue at the bottom. It was the final stages of an afternoon Christmas fete for what appeared to be a very thriving church community. This is the church where Sebastian regularly rings himself.
The last tower of the day was St Mary the Virgin, Islington. This was a pleasant walk away as it was quite a crisp afternoon. These have recently been restored and rehung in a new metal frame. The church acted as a large shop for Christmas Charity Cards and wrapping paper and they greatly benefited from our wait to ascend the tower. Once inside the tower we again had a few lighting problems this time with flickering lights. This rounded off a very interesting afternoons ringing. The large number of members present meant that we had the ability to ring a range of methods and the method for the day had been spliced Kent and Oxford Treble Bob.
Dinner was once again held at the Olde Cock Tavern, Fleet Street and 37 of us sat to an enjoyable meal, and the Business Meeting then followed. After this, the President proposed a vote of thanks to the Staff at the George for providing another enjoyable meal and to Sebastian and Susan Lucas for organising an interesting afternoons ringing.
The meeting closed at 10pm and was followed in the customary manner with handbell ringing 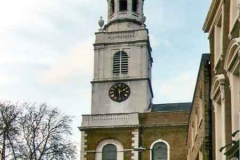 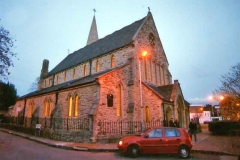 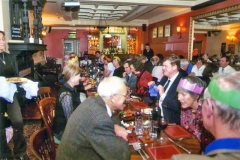 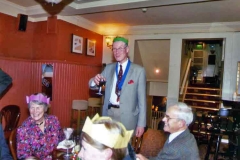