The 2003 Summer Meeting of the Guild was held in and around Taunton, the county town of Somerset, over the weekend of 16th to 18th May. Our thanks go to our Ringing Master, Ken Lee who began his ringing career in this neighbourhood. His wealth of local knowledge and connections were reflected in all his excellent organisation. There are 50 rings of 4 or more bells within a 7-mile radius of Taunton and Ken chose a representative sample for our delectation. It did indeed seem that virtually every village that one drives through has a church with bells.

A select band joined Ken for some tower grabbing during the day on the Friday. It was also arranged that members could join the Friday evening practice at St. Mary, West Buckland. This impressive tower on the hill is visible from the M5 and many of us have secretly admired it at a distance in the past.
As expected this choice of area proved very popular. It is possible that the crystal blue skies in our brochure had an effect, but on the Saturday we were greeted with very grey skies. However, quite undeterred, a large enthusiastic band queued in an orderly manner, long before the start time, to climb the tower of the 6 of St. Giles, Bradford-on-Tone. It was good to see a great range of age and ability amongst our numbers that was reflected in our range of methods. For some there was some hurried homework to allow a band to ring Bradford-on-Tone Place.

A short drive brought us to the 5 of St. Bartholomew, Oake. We had done so much work by then that we were already in need of refreshment. This took the form of coffee and bacon baps on offer at the excellent facilities at the golf clubhouse immediately adjacent to the tower and we were made very welcome. The tiny ringing chamber was accessed via a vertical ladder and a trap door. I am not sure whether it was the lure of a warm coffee break or the steep ladder that prevented a few members making the ascent.

Next stop was the very pleasant ring of 8 of St. Michael, Milverton. The Met Office has promised us a band of rain in the morning. This had now arrived, but our band of ringers was more inclined to focus on the task in hand, ringing a wide range of methods including Bristol.
Some light relief was brought by lunch, nearly everyone heading for the Lethbridge Arms at Bishop’s Lydeard. The Landlord and his staff coped remarkably well with a group of 40 people and I understand they are used to hoards descending from the nearby steam railway. The food was generally considered to be very appetising and they got us all out on time.

A gentle stroll from the pub brought us to the 8 of St. Mary, Bishop’s Lydeard. This church has a fine carved screen and beautiful 14th Century stone cross in the church yard. However despite a £45,000 re-hang in 1994 these bells proved a little more of a challenge for us. It was a good post-prandial wake up call but we managed some St. Clements College Bob Triples, which was our chosen method of the day, together with some Erin, Double Norwich and Spliced Surprise.
Next stop was the 6 of St. John, Staplegrove. This was a little ground floor six at the side of the church.

However, whilst we were waiting to ring we were treated to cakes and tea, provided by the local ringers, in return for donations to the church funds. I can honestly say I had some of the most delicious home made cake that I have had in years and I know which bed and breakfast I will be looking out of when I next visit. The sun shone on us at this point and we were able to eat and chat outside and we were all very grateful to the local band for their hospitality.
The last tower of the day was the 10 of St. George, Taunton (Wilton). We had an hour’s ringing here before making our way to the Corner House Hotel Taunton. Most members were staying there although it was not quite big enough for everyone but fortunately it did have a large enough dining facility to cope with us all. The hotel had in fact only just re-opened after many months of refurbishment and everything was new and fresh even if absolutely everything was not quite yet in place. We obviously needed to be on our best behaviour or it would have been very obvious who was responsible!
We congregated for dinner and Ken Lee had very kindly provided us all with Perry’s Cider as part of our education about Somerset and its traditional wares. Forty-two of us sat to dinner and the staff all coped well with a varied menu.

After the meal we had a brief business meeting. Our President John Verity first proposed a loyal toast.
There was then some sad business as speeches were given about David Heighton and Eve Gullick who had sadly recently died and a minutes silence was held. It was announced that a Peal of Plain Bob Royal, the first of Royal for the Guild, had recently been rung by members of the Guild at Egham, in their honour.
A discussion then took place about the booklet ‘Bellringing and your Health.’ Articles had been returned to members for final checking and inclusion of illustrations and permission was given for the Secretary on their return to produce in house copies that could be advertised and sold at a profit for the Guild but which could easily be added to. It was hoped that the first batch would be ready for the AGM.
There were discussions about venues for future meetings, mindful of the fact that 2005 is the 50th Anniversary of the Guild. We had offers of weekend Venues of Yorkshire 2004 – Nick Davies, 2005 –Loughborough, Leicester, Andrew Young and 2006 – Lancashire, Ken Lee. It was proposed that the November 2005 meeting of the Guild should be in Twickenham where the Guild held its inaugural meeting. There were also discussions about whether it would be possible to hire a bus for the meeting but it was felt that this was probably impracticable. Ken and Wendy were thanked for their excellent work together with the secretary and the meeting was closed in the customary manner with hand bell ringing. The new Guild web site was also available for inspection before members drifted off to bed after a very enjoyable day.

A few members were up bright and early for breakfast so that they could join local ringers to make up the band for the service at St. Mary, Taunton. As a result of damage to the tower that is currently under repair, only the front 8 of this 12 can be rung. A short walk took us on to the 8 of St. James, Taunton where a few of us again rang for the service. It was very noticeable that both these churches attracted a very large and active congregation. To round of the morning we were very pleased to have the opportunity to ring at Potters Yard. This 1 cwt 10 are privately owned and proved a challenge for some of us. We were, however, very grateful to the owners for affording us this opportunity. Most members set out on there return journey from here but a few hardy members continued to ring at the 4 bell towers of Thurlbear and Kittisford. This concluded a very enjoyable and interesting weekend with ringing to cater for all abilities and an opportunity to meet with old friends. 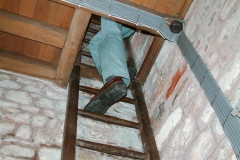 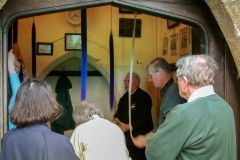 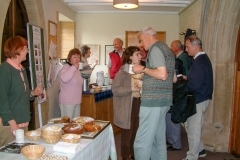 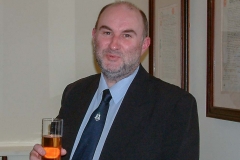 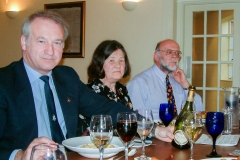 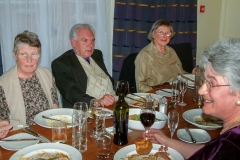 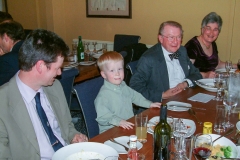 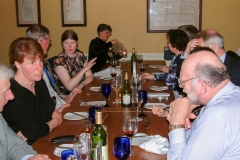