The Medical Guild held its summer meeting on the customary 3rd Saturday in May around Congleton and Macclesfield, an area forming the boundary between the Cheshire Plain and the Peak District National Park. Members met on the Friday lunchtime in the idyllic village of Barthomley – lunch in the White Lion, a superb timber-framed thatched pub, followed by ringing on a lovely eight in the church immediately next door to the pub. Bellringing heaven! This was followed by ringing in shifts on the eight at Alsager, where space in the small tower is at a premium. The final afternoon tower was Church Lawton – a rather challenging eight in a church overlooking the Trent and Mersey Canal. We did eventually triumph with one good course of Cambridge on these difficult bells. Members then booked in to the venue for the weekend – the Plough Inn at Eaton, just outside Congleton. Some later supported the local practice on the classic old Taylor six at Poynton.

Ringing on the Saturday involved the pick of the bells in and around Macclesfield, starting with the excellent eight at Prestbury. Ringing included successful courses of one of the special methods for the tour – Congleton Surprise major. Back through Macclesfield for the lovely six at Sutton, where floods had washed a bridge away recently, making driving to the church slightly awkward. Ringing here included the other special method of the weekend – Sutton Alliance minor. Lunch was arranged at the Sutton Hall pub, where we were all wined and dined with wonderful efficiency in the short time available. It was then a short drive to the rarely rung light eight at St Peter’s Macclesfield. A rare grab for some of the group, these bells were considered to be one of the highlights of the day – a gorgeous 8cwt Taylor eight of 1947. The bells are sadly very rarely rung – being very loud in a residential area they give rise to complaints. Although the church is lively, there are no ringers, and recent vicars have not been keen on the bells being rung. Ringing on them remains very limited at the moment. It is hoped that this situation might improve in the near future.

Some non-ringers then visited Macclesfield’s Silk Museum, while the ringers found the ten at Christ Church somewhat challenging again, tower movement causing the bells to misbehave this time. Some reasonable Grandsire and Stedman caters and Plain Bob royal was achieved here. After ringing, we were allowed inside to view the church – an impressive Georgian masterpiece, now sadly redundant. There was enough time for afternoon tea and shopping in Macclesfield, before ringing at the Parish Church of St Michael’s. While not being a strong 12-bell band, we did ring good call changes on the twelve, and other ringing included a respectable touch of Stedman caters. A few more adventurous ringers then took advantage of the opportunity to ring on the three at Eaton, close to the Plough Inn. In their original fittings and never rung, they were checked over, oiled and pulled up. Despite a broken rope followed by some rapid splicing, everyone who wished to ring there was able to! Further maintenance is being planned, since a local parishioner heard the bells and asked about having them rung for a wedding in the near future. It was good to see that we had stimulated some local interest.

33 members and guests sat down to an excellent dinner in the converted 300 year-old timber-framed barn that is now the restaurant of the Plough Inn. As is customary at the summer dinner, the business meeting was minimal. After the usual votes of thanks, Ben Hockenhull from Macclesfield was elected to the Guild, and notification of the November meeting, to be in the East End of London, was given. Stephen and Janet Clarke also confirmed their kind invitation to organise the Summer 2012  meeting in Suffolk  and Ken and Wendy Lee  were thanked for all their work in organising this summers outing. Handbell ringing then ensued, with plain hunt on 18 bells done by lapping causing considerable amusement!

On Sunday morning, the Guild provided the service ringing at Congleton and Astbury – two very contrasting rings of eight. A few members took coffee at a local garden centre and several visited the nearby Little Moreton Hall (National Trust) to round off a very pleasant weekend before starting out for home.. 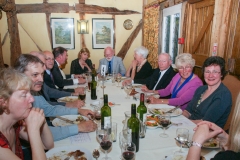 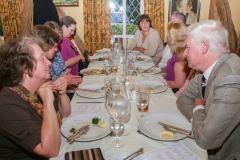 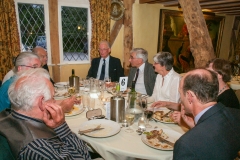 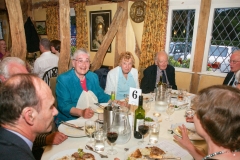 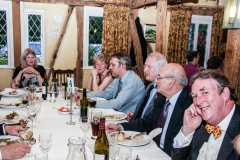 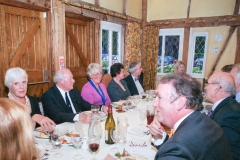 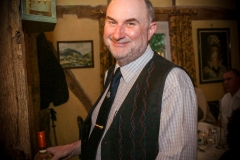 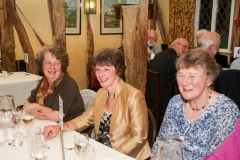 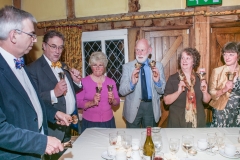 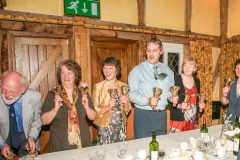 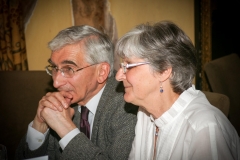 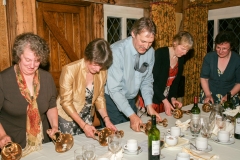