The 2014 summer meeting of the Guild of Medical Ringers was held along the route of the Severn Valley Railway in Worcestershire over the weekend of 16th -18th May. Our thanks go to Rosie and Paul Marshall for organising the events. Special methods for the weekend were Kidderminster Minor and Bristol Surprise Major.
Friday 16th May started with an advanced party visiting Clent to ring a quarter peal. Cambridge major was attempted but two of the band were not feeling at their best and stood down and a quarter peal of minor was successfully achieved.
After lunch at the Queens in Belbroughton, members gathered to ring at the nearby ring of six at Holy Trinity Church, Belbroughton. Entry to the next tower, St Cassian, Chaddesley Corbett was delayed as there was a problem with keys/as we had one key, but found two locks! Fortunately in proved possible to extend the stay and take the opportunity to have tea and cakes at the WI tea shop across the road.
On the Friday evening we were invited to attend a special practice at St John the Baptist, Wolverley and it transpired it was to be our practice. The bells proved harder work than their weight suggested and the treble was challenging but we had time for some longer touches and achieved a good standard of ringing.
Saturday dawned as a beautifully sunny day. As additional members began to gather at the Severn Valley Railway station at Kidderminster, some members took advantage of the full English breakfast served in the restaurant there.
The Severn Valley Railway runs for 16 miles along the River Severn from Bridgenorth to Kidderminster. Originally built between 1858 and 1862 it opened as a Heritage Railway in 1970 mainly operated by steam in the summer periods with diesel taking over off peak. It passes though some beautiful scenery and it gave us the opportunity to have a novel car free day’s ringing. We passed some interesting attraction such as the safari park where a tiny baby elephant was a focus of intense attention
We travelled by diesel to the first tower of the day, that of the 8 of St Mary Magdelene, Bridgenorth a five minute walk from the station. This church was designed by Thomas Telford. The tower here is very small so we had to ascend in groups but whilst waiting were able to refresh ourselves with tea and coffee downstairs, sold to raise funds for the church.
We made our way into town to assorted lunch venues, many of us retiring for lunch in the sunshine in the garden if the Old Castle Pub. Next tower was that of St Leonard, Bridgenorth St Leonards Church is a redundant church in the care of the Churches Conservation Trust. The interior is beautiful and the tower contains a ring of 8 with long ropes.
We then caught a steam a train back to Bewdley to the last tower of the day, the 8 off St Anne, Bewdley. The excellent turnout had proved rather a challenge to organise any prolonged ringing but most of us were able to squeeze into the tower there for a lot of the time.
It had been quite a relaxed day in the sunshine and we caught a steam train back to Kidderminster. Here we enjoyed a very pleasant meal in the Valley Suite of Kidderminster Station and 40 of us sat to eat. As usual after dinner there was hand bell ringing.
Some members left to return home after the meal but others gathered on the Sunday morning to ring at Bewdley, Chaddesley Corbett or Kidderminster. Kidderminster proved to be the most popular venue with about 20 members ringing for the service, on the 12 of St Mary and all Saints’ Kidderminster. We were made most welcome there and our ringing was well up to scratch for Sunday Service.
On the way home six of the Guild visited Croome D’Abitot, where the National Trust gained a member and the Guild scored another quarter peal on the heavy going 10 cwt six at St Mary Magdalen. The park there had become the hospital for nearby RAF Pirton during WW2.
This brought to an end another successful weekend meeting. We are always delighted to hear from any ringers training or qualified in any of the health professions who think they would like to join us. 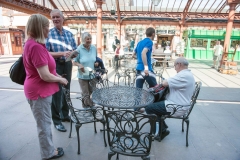 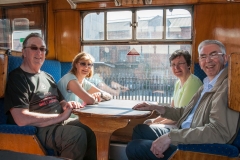 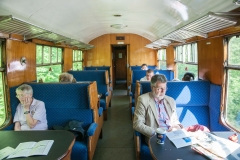 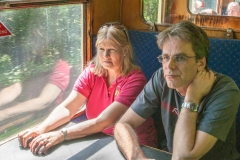 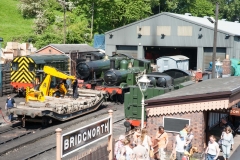 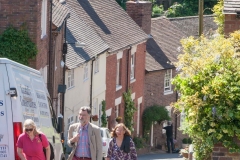 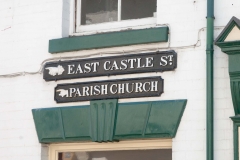 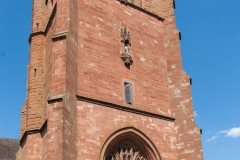 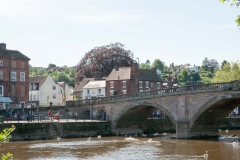 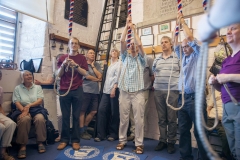 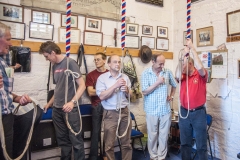 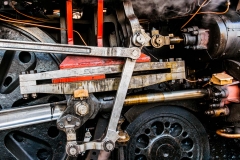 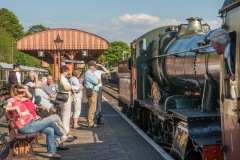 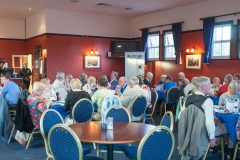 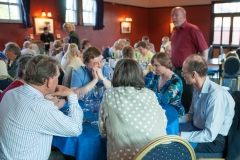 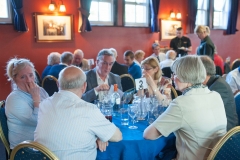 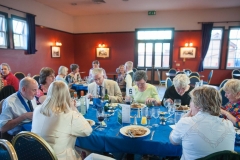