The 2018 Annual General Meeting of the Guild was held on Saturday 24th November in the City of London.
As in recent years it was arranged so most towers were easy walking distance. Arrangements had been very problematic with late changes despite moving the 4th Saturday of the month to avoid clashes with the Cumberland’s peal day. However, we are immensely grateful to Geraldine Forster for all her hard work in arranging the towers for us. 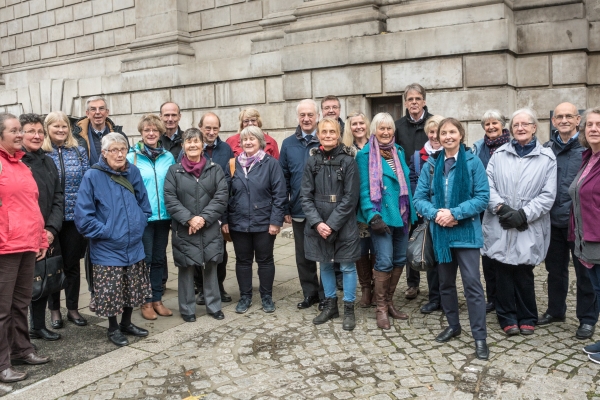 The weather was damp with a winter chill but this did not dampen our spirits. In the morning there was a successful quarter peal of 1250 Yorkshire Surprise Major at Christ Church, Spitalfields, with far more members keen to ring than we were able to accommodate.
In the afternoon we began at the 6 of St Katherine Cree.
However, the highlight of the day was unquestionably the invitation we had received to view the newly refurbished and rehung twelve bells of St Paul’s Cathedral. We are immensely grateful to Lucy Woodward for giving up her afternoon to show us around and also to Geraldine who was able to be an additional guide so we were able to accommodate 24 people on the tour, some others having had the opportunity in the past to visit. We gathered at the crypt entrance at 3 pm and climbed the stairs and moved through the sewing room, viewed the spiral staircase used for filming in Harry Potter, past some of the stonework preserved from the original cathedral burnt down in the Great Fire of London, and into the ringing chamber. The walls here have painted peal boards with very many famous names who rung in peals to mark many events of national significance. One of our previous Presidents, Phillip Chalk, was a regular ringer here. Absolutely no photographs are allowed in the crypt and the journey up, but are allowed in the ringing chamber, so we had a group photograph there. We then climbed a little higher to see the refurbished bells hanging in their original frame. This was s very memorable afternoon.
Our final tower of the afternoon was the 8 of St James, Garlickhyth, another church rebuilt by the office of Sir Christopher Wren after the Great Fire. It is one of the official churches of the eleven city livery companies, with a beautiful glass chandelier in its interior. The bells are a new ring of eight, cast by Whitechapel Foundry and temporarily installed on a barge and rung on the River Thames during the Thames Diamond Jubilee Pageant before being hung here.
Some people had to leave us at that stage to get trains back to various parts of the country. There was then a short walk to the Olde Watling for our dinner. We had a short business meeting lasting until 6.40 and we were then served with a filling meal. The day closed in the customary manner with hand bell ringing

Members of the Guild rang a quarter peal to commemorate this event and attended the service at Westminster Abbey. Full details here

The 2020 Summer Meeting of the Guild will take place on Friday 15th to Sunday 17th May 2020 in the Mendip area of Somerset. London.  Full details of towers and arrangements  will be sent to members by post.