The day began with a quarter peal attempt in the morning at Wimbledon but unfortunately this was not successful.It was a grey day with periods of heavy rain but this did not dampen spirits and was in fact slightly less wet than the prior amber weather warning. We were once again indebted to Geraldine Forster who had organised the towers for us. A change of date to the second Saturday of the month had led to a larger turn out than recent years and there were 34 of us for ringing during the afternoon.
Our first tower of the afternoons was the fine 10 of All Saints Fulham which were rehung in 2014. This church has a stone tablet in memory of the chief physician to Henry VIII. There is a video recording system of the bells which is viewed from the ringing chamber.
A short walk in the rain across the river over Putney Bridge brought us to the lively church of St Mary Putney with its 8 bells. A fire in 1773 gutted much of the church except the bell tower and it has been rebuilt to use as the heart of the community with numerous educational and social events. There was a pleasant café at the entrance where we were able to get a welcome cup of tea. We had to cross the church to climb the tower and on this occasion the church had been completely cleared for a grand fund raising dinner later that evening. Here we were able to ring Putney as the method of the day.
The final tower of the day was the 8 of St Mary’s, Barnes. By coincidence this church had also been destroyed by fire in 1978. The tower had been left standing but the church had been rebuilt in a modern style including elements of its former structure and served as a focus for community events. The bells were removed after the fire and rehung in1981 and were a ground floor ring. When we arrived final clearing up was occurring after the fund raising church fair and we were made very welcome.
Dinner was held a short distance away in Coach and Horses, Barnes where we had our own room. Prior to dinner being served we held our 60th Annual General Meeting. 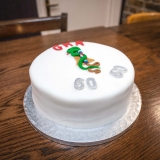